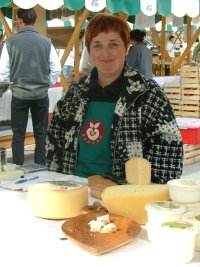 On Saturdays from 8am to 2pm. During the week (Wednesday) from 8 am to 2 pm - individual stands in the summer season.

On Saturdays, the organic market operates in full scale (over 30 stands).

Providers on the organic market are organic farmers from all over Slovenia who sell seasonal vegetables, fruits, cereals and milling products, juices, teas, herbs, vinegars, oils ...

At the market, each stand has a valid certificate that demonstrates that foods have been produced/processed according to the organic production standards.

The operation and development of the organic market is coordinated by the Institute for Sustainable Development (ISD). It was developed as part of the project "Redirecting farms in the Municipality of Ljubljana to organic farming", co-financed by the Municipality of Ljubljana and in cooperation with farmers from the Association of Organic Farmers in Central Slovenia.

The Ljubljana organic market was established in July 1999 at Cankarjevo nabrežje as the first market with foods from controlled organic production in Slovenia. The first year it consisted of only two stands, but in year 2000 there were already ten stands. In 2001, due to the increase in range, it moved to the current location.

The first market with foods from controlled organic production in Slovenia at Cankarjevo nabrežje in Ljubljana (1999).

Since January 2005, the organic market is part of a new, restructured supply of the central Ljubljana market in Pogačarjev trg. Ljubljana is one of the more and more numerous cities in Europe, where such an offer of organic food has already become commonplace.

In 2009, the Ljubljana organic market celebrated its 10th anniversary.